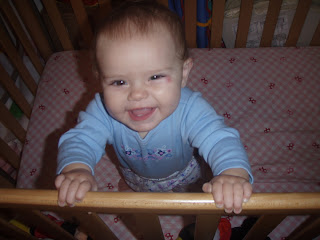 Well, where does the time go? There actually isn't a whole lot new to report since the last update, except that she is now pulling up on everything, all the time. She's started taking some tentative steps along the edge of the coffee table, but not too much yet. We're realizing just how much more stuff she can get into at this new height. And she seriously loves getting into everything. But it's not without its consequences. For one thing, she's hearing the word "no" a lot more often now. :-) For another, see that big ol' bump under her eye? Well, how does that saying go? The higher you are the harder you fall. She's finding that out the hard way, poor thing. It seems like she's constantly falling back down and hitting her head on something. Hopefully she'll get this whole balance thing figured out pretty soon. Or at least figure out how to sit back down more gracefully. :-)
She's also mastered crawling in the last three weeks. She crawls all over the house, mostly getting into trouble. But sometimes she'll follow me around or come when I call her, which is really cool. She's getting so smart. It's starting to sound like she's trying to figure out some words, so I wouldn't be surprised if we hear her first word sometime soon. I wonder what it'll be. :-)

So I guess that's about all for now. If you haven't yet, please donate to make her the Most Photogenic Baby! It's only 50 cents for a vote, and it goes to a good cause. :-) 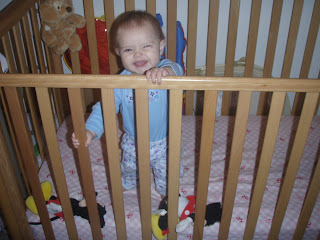 This is what we see now when we get her up from her naps!