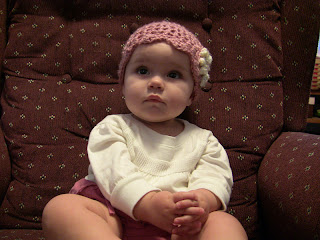 (this is not the picture entered in the contest. It's just a cute picture of Amber to give you the idea.)
We've always said that Amber is the cutest baby ever, but hey, what parent doesn't say that? Well, now we're putting that to the test. Today, we took Amber to the mall, where a traveling photography studio was set up taking pictures for the Most Photogenic Baby of 2010 contest! They took about 40 pictures (all of which were uber adorable) and we had to pick just one to enter. It was a seriously hard task, but we eventually narrowed it down and made a choice.

There are two ways to win the contest and move on to the next level. The first way is selection by the judges. We, of course, are quite confident that Amber's got that one in the bag. The second way to win is by popular vote. Here's how it works: this entire event is a charity event to benefit the Children's Miracle Network. So all funds, including our entry fee, go to charity. Votes cost 50 cents each and, agan, all of that goes to the charity, too.

This is where you come in. We can collect money on Amber's behalf and all of it goes toward her popular votes. So any donations by our family and friends goes straight to charity, and racks up more votes for Amber! It's a win win! One vote is 50 cents, making it 10 votes for a measly $5.

As an added bonus, if we raise $100 on Amber's behalf, we get a CD filled with all 40 pictures they took at the photoshoot! So here's the bribe: Anyone who donates will get copies of the pictures. :-)

You can't lose! Vote for an adorable baby, donate to charity, and get copies of some crazy cute pictures. And look, I've made it super easy to donate:

All donations collected through here will be set aside and entered on Amber's behalf. I've also put the same button on the sidebar of the website so you can always find it. :-)
Thanks in advance!
.