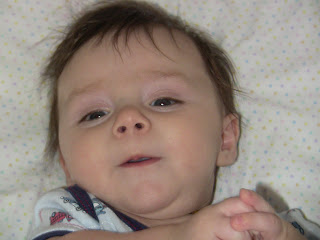 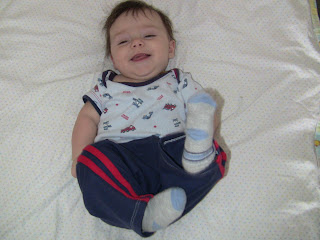 I can't even believe it's been three months already. The time is flying by. I blinked and suddenly he wasn't a newborn anymore. He is quite a happy baby. He smiles all the time. He rarely gets upset, and when he does, it's usually because he's sleepy. This child loves to sleep. He gets upset if he wakes up and still wants to be sleeping. He fights hard to fall asleep. He is very different from his sister in this way. Amber, even as a newborn, used to fight hard to stay awake. 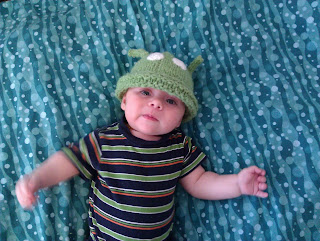 He's getting bigger, too. He now weighs 14 pounds, 10 ounces, can hold his head up like a champ, and will probably be rolling over soon. Just the other day he was able to reach for and grab a toy. And he is squirmy! He is extremely difficult to hold. He kicks and pushes and is always trying to move. If we lay him on his back on the floor he can skooch himself around. 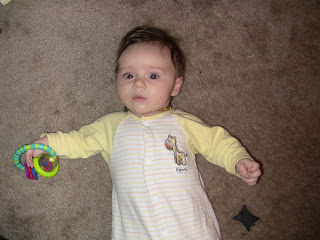 Amber is just as in love with him as ever, though her "hugs" are getting a little more intense. She loves to show him stuff: "Look, Evan! Apple, Evan! Fireworks, Evan!" One of her favorite things in the world is to go in and see him when he wakes up from a nap. That also happens to be one of my favorite things too, because he'll lay there and smile at us for at least 5 minutes. 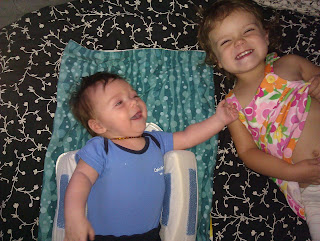 He is such a sweet boy. He makes us all very happy. 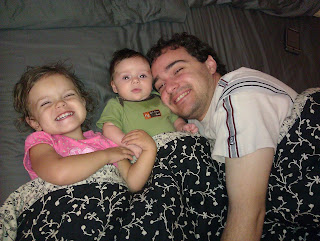