Wow, seriously a TON of stuff has happened over the last month and a half, so I'm going to split this up into several blog posts over the next few days.

Amber got her very first tooth on December 11th, and her second tooth followed on Christmas day. Her smile looks so cute with those two little teeth down there! Here's a good picture of them: 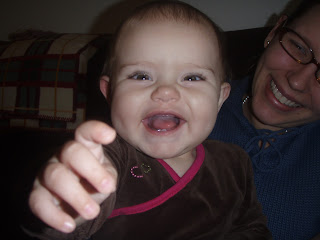 Then on the 13th Amber and I flew to PA to visit my parents. This was Amber's first time on a plane and she did extremely well, especially given the circumstances. For those of you who don't know, this flight turned into quite an adventure. First of all, we were delayed about an hour taking off because one of the three toilets on the plane wasn't working. So maintenance tried to fix it, realized they couldn't, and then decided to take off anyway. I think if they had taken a vote we would have all agreed to do that in the first place--it was only (supposed to be) a two hour flight, after all.

So then as we were taking off, we suddenly stopped. I mean, we were speeding down the runway, about to lift off, and then they slammed on the brakes. The pilot said one of the brake lights came on, so they had to turn around and have maintenance take a look at the brakes and also refuel. So we were delayed another hour so they could tell us it was just a problem with the brake light, not the actual brakes.

Then we took off again, and everything was going well. There was quite a bit of turbulence, but it wasn't a big deal. But we were flying into Elmira and the whole northeast was getting hit with a snowstorm that day. So we entered a holding pattern while they tried to de-ice the runway, but we didn't have enough fuel to wait around, so we had to fly to Rochester to refuel. However, the airline I was flying doesn't normally fly to Rochester. So not only were we not allowed off the plane, we had to wait an hour and a half for them to fax the paperwork so the appropriate people would get paid for the fuel.

At this point the baby had been doing pretty well, though she was frustrated with not being able to move around and had cried a few times. By the time we landed in Rochester, I was ready to cry too. But we finally made it to Elmira in one piece. We ended up being on the plane for a total of 9 hours and I was exhausted. Then we had a two hour drive back to Montoursville and when we first left, all of the roads were closed from the storm. But we made it there safely and quickly. :-)

Mom, Dad, Mindy, and Carter had all waited all day at the airport for us, so they had quite an interesting day as well! I heard that Carter was really good in spite of everything too. :-)

When we got there the whole family came over for dinner and exchanged Christmas gifts. It was an extremely busy day, but it was a lot of fun! It was great seeing everyone and celebrating Christmas together. The whole visit was really fun. Here are some pictures from the visit: 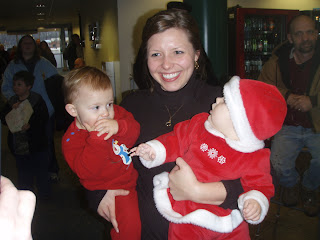 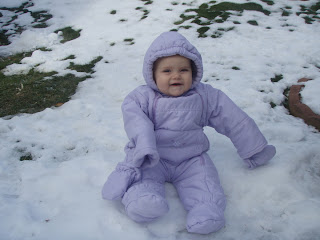 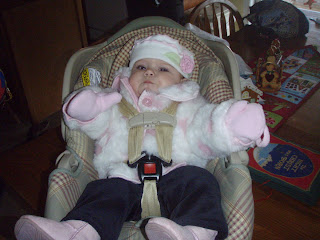 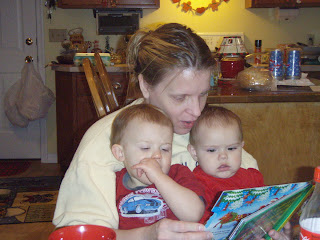 However, the week didn't end very well. On Friday night (I was leaving on Sunday) Amber fell off the changing table. We weren't sure at first if she was hurt--it was really hard to tell. But after a few hours there just seemed to be something wrong, and we thought it had something to do with her left hip. So we took her to the Emergency Room. We waited there forever, and of course she seemed fine the whole time we were there. But when the doctor finally saw her he agreed that there was something wrong and x-rayed her leg. It turned out that she broke her left femur. :-( Fortunately, it wasn't a very bad break--it was clean through and didn't affect her growth plates. It only took her three weeks to heal completely.

However, I felt completely terrible and was struggling a little with being away from Ryan, but Mom and Mindy were with me and that was a huge help. So they put a cast on her and we went home. By the time I got back to Florida (the flight home was uneventful, thankfully!) she was already getting used to the cast. It didn't take her long to figure out how to move around with it--she actually got quite good at it. :-)