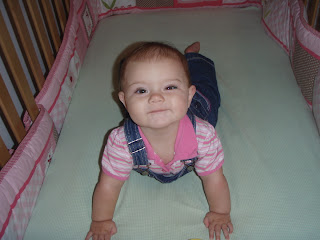 Well, Amber's 8 months old now. Unbelievable. She is growing right up and her little personality is starting to come out. She's also more aware of what's going on around her, which means she's wanting to play more, she wants more attention, and she especially wants mommy. It's been increasingly difficult to find time to get online--which is why I completely missed her 7 month update. :-) She gained almost a pound this month. She's up to 19 pounds, 12 ounces. Here's a picture of her at 7 months for a comparison. 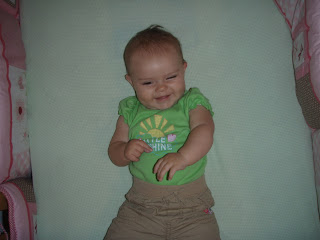 She's on the very edge of crawling. She has started rocking on her hands and knees recently. We're excited to see her able to move around and explore--although a little nervous about keeping her out of trouble! We're going to have to get serious about this baby proofing thing. 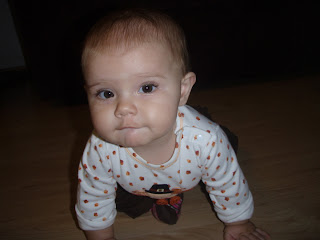 Speaking of keeping her out of trouble, she's getting very quick with her hands. Ryan was holding her at the store the other day and he went down an aisle to look at something. Well, he didn't realize that behind him were shelves of picture frames. In about half a second she managed to smash two frames. Oops! We (hopefully) won't be making that mistake again!

She really enjoyed her first Thanksgiving. Well, she really didn't know, but we'll pretend she enjoyed it. :-) We watched the parade in the morning and got everything ready for dinner. Ryan worked until 6:30 so Amber and I had most of the day to ourselves. We went for a walk in the afternoon to kill time and get outside a little. I tried unsuccessfully to put her to sleep around 6. Then Aunt Shanna came and Amber got to stay up with us for dinner, which we ate around 7:30.

This was my first year cooking Thanksgiving dinner, and it was a lot of fun. Everything turned out really great! I did almost everything, including the turkey, ahead of time, which made it so much easier to get everything on the table, especially since no one else was here to help with the baby. On the menu this year was: orange rosemary turkey and gravy, mashed red potatoes, stuffing with sausage and raisins, harvest rice, balsamic glazed carrots, rolls, apple cranberry sauce, maple pumpkin pie, gingery apple pie, and hot spiced apple cider. It was sooo good! And I seriously had a blast trying out new recipes and making stuff I wouldn't normally make. We were so glad Shanna could join us too. It would have been a bit lonely without her, I think. 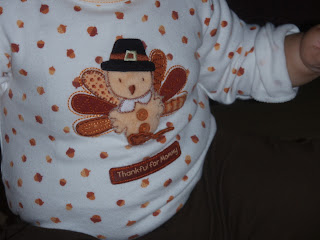 Ryan and I got free tickets to Magic Kingdom yesterday for their taping of the Christmas Parade that airs on ABC on Christmas day. We were in the audience while they taped Yanni and The Voices. It was fun. Amber was all dressed up in her holiday outfit, but it got pretty warm so we changed her into her Disney princess dress. I don't know if we'll be on TV or not, but you can look! 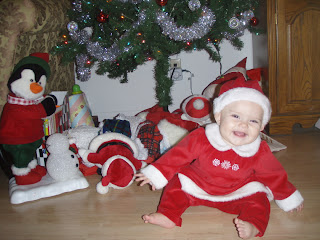 They also taped a performance by Kris Allen (the current American Idol, for those of you who don't know) which we didn't go to, but we walked by later and saw him perform. We spent the rest of the day just enjoying the park. Shanna met up with us after she got off of work, which is always fun. :-)

Amber is becoming much more aware of what's going on around her. She was fascinated by everything. She spotted the Goodyear blimp, the flags around the liberty bell, some flags and sparkly trees around the castle, and a lot of streetlights. :-) She loved it. We took her on Small World for the first time because we thought she'd really like seeing all of the dolls. She loved all the sparkly stuff going on at the entrance while we were in line, but we got about halfway through the ride and she fell asleep! She was already tired, and then the rocking of the boat and repetitive music just did her in! 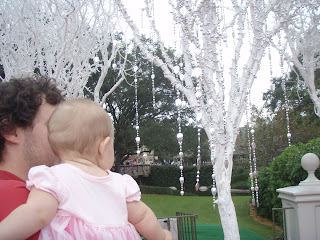 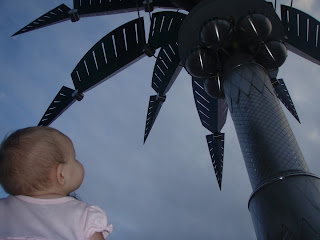 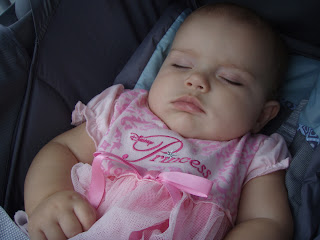 And she's getting her first tooth! We can feel a sharp little point in there, but she won't let us get a good look. I don't think there's anything to see yet anyway. It should pop up any time now! She's been sticking her finger in there and feeling it too. And she bit me with it already--not even a whole tooth yet! (It was an accident, though!) So that should make things interesting. :-)

We're excited to enjoy some of the local things going on for the holidays. SeaWorld and Universal are supposed to have some fun stuff happening, and there are lots of other things to do. We have our tree up (which Amber loves!) with a bunch of Christmasy stuffed animals camped out underneath for her to play with. It'll be fun having a baby for Christmas! 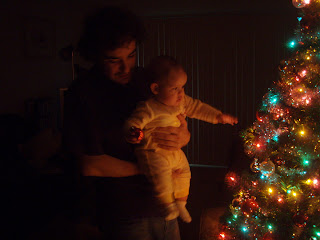 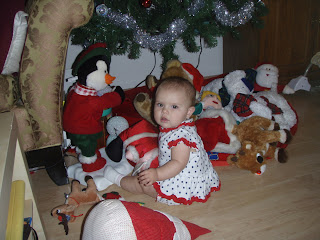