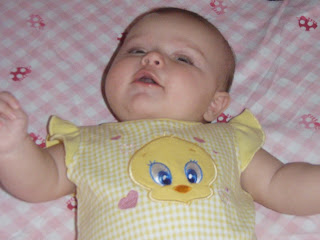 That's right, three whole months have gone by already. So super crazy. It's amazing because I look at her now and I'm really starting to see a little person, not just a baby. She's settling into a routine during the day. She doesn't do things at the same time every day, but she usually seems to follow the same pattern, which helps. She still sleeps wonderfully, but she's started falling asleep earlier in the evening than before. It's great because then Ryan and I can enjoy a few hours together each night. But on the flip side, she now wakes up for her first feeding at around 3:30am instead of 5:30. I'm not a huge fan of that, but I imagine she'll start stretching that out before too long.

This has also been a big month for her developmentally. First of all, she's grown a lot. She's now 15 pounds, 14 ounces and 24 1/2 inches long. She can lift her head up from her stomach. I just laid her down one day and she held her head about an inch off the floor for 30 seconds or so. But she's only done it once since then. I've suspected that she's been able to lift her head for awhile now, but just doesn't want to.

She's also learned a lot about her hands this month. She bats at things sometimes, and I gave her a rattle to hold and she grasped it and held on tight for about 10 minutes while she shook it around! 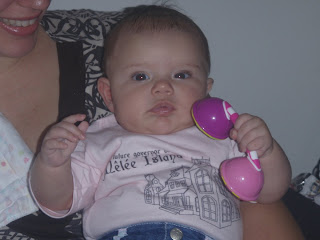 She also discovered her hands. She was sitting in the swing (which she adores, by the way. She loves to stare at the hinge where the motor is. I don't know why it's so fascinating, but she pretty much stares at and talks to it the entire time she's sitting there) and Ryan looked over and she was staring at her fist with this look of deep concentration on her face. It was so cute! I managed to get a picture: 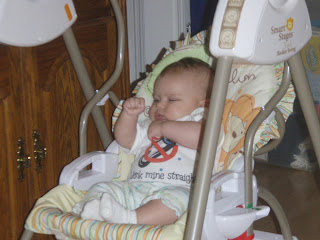 It's only a matter of time before she starts putting it all together and realizes that her hands are attached and she can use them to grab things.
We also celebrated Ryan's first Father's Day this month! 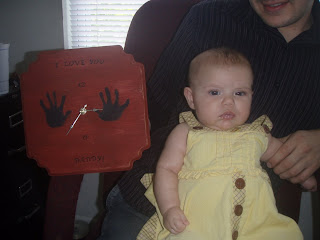 Another new thing she does is smile when we go to get her after she wakes up. She gets the biggest grin on her face--I love it! And sometimes when I'm singing to her to sleep, she'll stop mid-cry and smile at me. That's my favorite!
We took her to the pool this past Sunday. This was the first time we actually put her in the water. I don't really know if she liked it, but she didn't seem to mind, either. We took a bunch of pictures and they were all so good, I couldn't pick a favorite, so here they are:

And here are some more of my favorite pictures from this month: