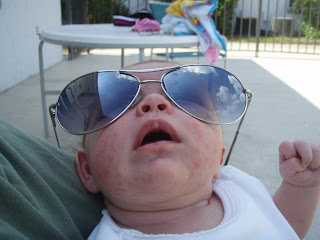 Yesterday little Amber turned one month old! I can't believe it's been that long already. I would have thought that after a month I would have a better handle on things, but...not so much. :-) I have definitely gained confidence in certain areas, but she is continuing to surprise us.

In her first month she started sleeping through the night (5-6 hours straight). She has pretty much been able to hold her head up since birth, and now she has a lot more control over it, though she's still a little wobbly. She's cried real tears, which we weren't expecting so soon--we didn't like it! She also had her first real smile a few days ago, but she hasn't really done it again since. And she's starting to be awake and alert more often, which has been fun. So we're looking forward to see what she has in store for us this month!

She's overall a very cooperative baby. We've been able to take her to all kinds of different places, and she does great. She went to see her first movie the other night, and she hardly made a peep, even though she was awake the whole time! She was the happiest when she was sitting so she could watch the screen. :-) We also wanted to take her to the pool for the first time yesterday, but apparently they don't make those waterproof diapers small enough. So we still went and I got in while she sat on the side of the pool with daddy. It turned out the water was probably a little too cold for her still, anyway, but we did stick her feet in, which was fun. Here's a video from the pool and some of my favorite pictures from this first month: