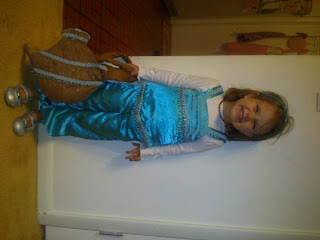 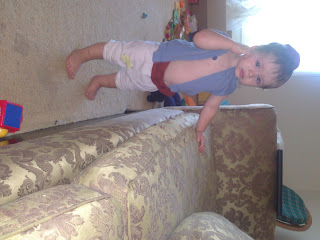 This is the first year I took the kids trick or treating. It was quite an adventure. Amber was really excited but Evan ran straight down the driveway to check out the mailbox, which is his latest obsession. All he wants to do is open and close it and then throws a tantrum when we finally tear him away. So we started off right away with a little meltdown when we moved on from the precious mailbox. I strapped him in the stroller and we headed to our neighbor's house. Amber was really excited about the candy but they had one of those motion sensor skulls that moves and talks. Amber was not a fan. But, we brushed it off and headed to the next house.

As soon as we got to the driveway about 15 older kids ran up and pushed past us. Most of them were wearing scary costumes. And this guy's house was totally decked out. He had the creepy music playing, ghosts and skeletons everywhere, lighting effects, everything. Amber never made it past the driveway. She totally chickened out. At this point I realized that I never really prepared her for the scarier parts of Halloween. She's only just starting to get scared of things, so it didn't really occur to me. And I forgot to warn her about all of the other kids' costumes. Double mom fail.

So then we got to the next house, and the guy answered the door in a scary mask. I pretty much lost her there. She never really recovered. We made it to one more house before she was ready to call it a night and head home.

So we headed back and at this point Evan had managed to slip out of the straps and was standing up in the stroller. So I let him down and he immediately sprinted into the street. I had to abandon everything and chase him down. I finally got both of them back in the house and no sooner did we walk in the door when Amber announced, "Okay, I want candy now." At this point I realized, belatedly, that after the first house I told her she could have some candy when we got back home. The entire reason she wanted to come home was so she could eat a piece of candy. [facepalm]

I asked her if she wanted to have a piece and then go back out to more houses. Nope, she was done. Then about 15 minutes later she asked if she could put her costume back on and go back out and get more candy. By then Evan was already in his jammies and ready for bed, so no dice. Our trick or treating was over for this year.

Between the two of them they got about seven pieces of candy. We were out for maybe ten minutes and made it to three houses. It was pretty sad, really. But, that's okay. I didn't expect to get very far with them and that's how these things go with little ones. And I think that now that Amber understands the concept, next year is going to be a totally different story!