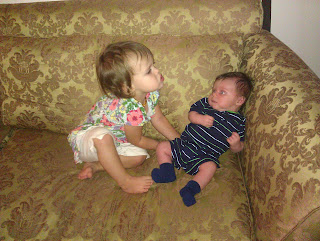 Believe it or not, yesterday was Evan's six-week birthday. I can't even believe it's been six weeks already! He weighs 12 pounds, 9 ounces. He can hold his head up, though he's still a little wobbly. He also smiles a ton--so cute! Everyone always asks how he's sleeping, and I'm happy to report that he's an excellent sleeper. He's slept "through the night" (5 consecutive hours) a couple of times now. He generally wakes up 2-3 times during the night to nurse. I can't complain at all.

Amber is a little bit obsessed with him. She loves talking about him, talking to him, showing him things, hugging him, giving him blankets, holding him.... She loves telling people that she's a big sister and how much she likes Evan and how cute he is. 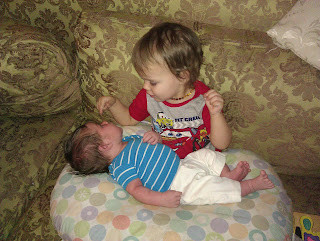 We celebrated Evan's first 4th of July yesterday by going to the Magic Kingdom. This was his second trip there, but the first time was just a short visit. Yesterday we went in the afternoon so we could stay for the fireworks (which he slept through). The kids did great the whole time and we all had a blast. We went on Buzz (Space Ranger Spin), the Transit Authority, and went to the Monsters, Inc. Laugh Floor. Amber's been watching Monsters, Inc. lately and she actually really enjoyed the show. She didn't get any of the jokes, but she had a lot of fun laughing and clapping with everyone. We also went to the arcade and it wasn't crowded so we let Amber climb in all the chairs and "drive" the cars and push all the buttons. That was her favorite part of the whole day. 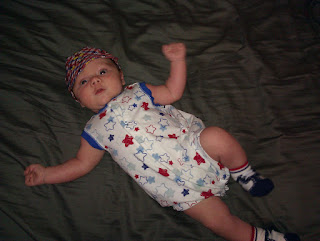