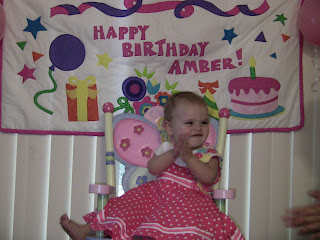 Our little baby is finally a year old. It's hard to believe, but it has been such an amazing year. She has grown and changed so much. In the last couple of months she's started really communicating with us. She said her first word, which was "duck." She loves playing with her rubber ducks, and if you ask her where her duck is, she'll look around the room until she spots one. Same goes for balloons. We have quite a few in our living room from her party, including a giant mylar birthday balloon, and she gets excited about them every time. She can also spot balloons from across the Magic Kingdom. :-)

She is working on a bunch of other words also, and she does a lot of pointing and gesturing to tell us what she wants. It's a lot nicer than having to guess all the time, although she still baffles us pretty often. :-)

She's not walking yet, but is getting close. She can cruise pretty easily and often will let go of whatever she's holding on to and balance for a second or two before grabbing it again. She'll also lunge from one object to another one if she can't quite reach it, but she always gets this wide-eyed look of terror on her face mid-lunge. 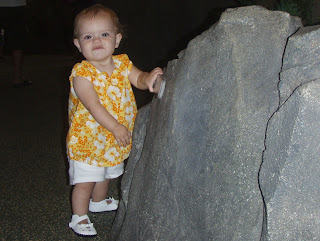 My mom and dad, Mindy, Von, and Carter all came down last week for her birthday. We celebrated her birthday on Sunday afternoon. I made a ladybug cake, which didn't turn out too badly. Amber got her own little ladybug cake too. And she daintily picked at the spots for awhile before she finally got into it a little more. But even then she didn't make a big mess, despite promptings from her Pappy and uncle. 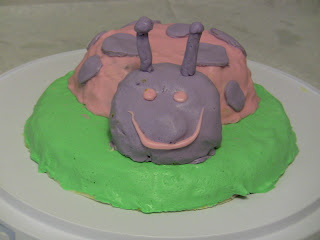 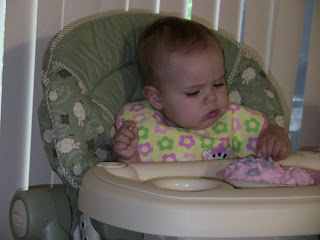 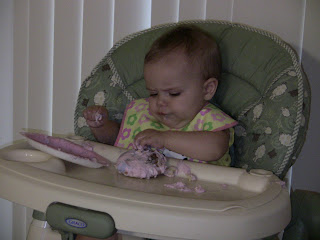 We spent the rest of the week hanging out and visiting some parks. We went to Universal and Islands of Adventure one day, and we also went to Magic Kingdom. It was Von's first time going to any of them, and he really seemed to have a blast. :-) I think everyone did. Magic Kingdom was open until 1am the day we went, and we were there past closing. None of us could believe we stayed that long, but we all had fun, and got to do everything we wanted to. The whole week was great and everyone had a really good visit. It was too short, though. 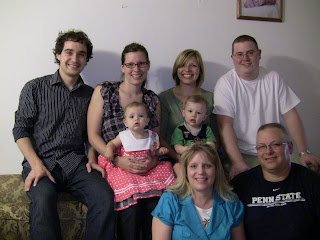 I still have a hard time believing it's been a whole year since we first met our little girl. It did go fast, but it was very full. We enjoyed every minute and are super excited to see what next year has in store. :-) 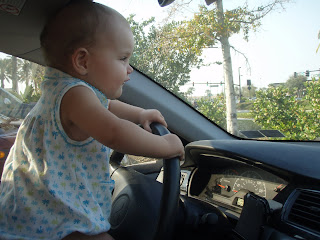