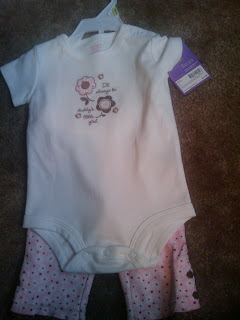 I'm officially halfway through the pregnancy. Yay! Although, that's completely technical since the second half is probably going to feel way longer than the first half. First of all, I'll be way bigger than I even already am, which will come with all kinds of joys of its own, I'm sure. Plus, I didn't even find out I was pregnant until the first 4 weeks were already past. Still, only 20-ish weeks to go, which we're really excited about. We can't wait to meet her!
I've been feeling great. I have heartburn sometimes, which is a somewhat new experience for me. I also get tired a lot more easily, but that's easily remedied. :-) I can feel the baby moving now, which is very interesting. Ryan thinks it's really cool, but he's a little frustrated that he can't feel it, too. I think he feels a little left out of things, understandably. But hopefully he'll be able to feel her too before long!
In other news, the weather's been great down here. It was 87 on Thursday so we took advantage of it and went to the water park, Sea World, and City Walk. It was a really fun day. Sea World is already decorated and playing Christmas music. They have some kind of Polar Express thing that we wanted to check out, but it didn't start until Friday, so we'll have to go back.
Also, we watched the space shuttle launch last night. It was the last night launch scheduled for the shuttle, apparently ever, so I'm really glad I got to see one. It was really cool! The whole thing is pretty amazing to me. Ryan took a video of it from our terrace, but you can't really make anything out, unfortunately.
I hope everything's going well back up north. We think about you guys all the time. I hope you're enjoying the cooler weather too. It probably feels a lot more Christmas-y up there, but we're enjoying the new experience of November in Florida. It's certainly different. We are hoping to come up for the holidays but, as always, it all hinges on the job situation. Right now it's looking like we'll be up for Thanksgiving, but we'll have to see about Christmas. :-) Miss you all!
.